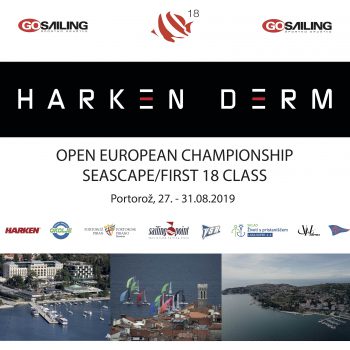 For the whole 10 days our team was laying the marks, publishing regatta documents, organizing social events – all together it ran 3 sailing events:

The weather was not all that much on our side – incredible heat and thus not much wind were the landmarks of the happening on water, however it was just enough wind to set the racing courses through all three events and have most of the water-schedule covered. The only exception was on Friday, the penultimate day of the Europeans, when a week bora kicked in and made the fights on water a bit more interesting.

Val Navtika Cup was sailed in Izola by classes Ceascape/First18, Open and ORC and joined sailors from 5 countries (AUT, GBR, ITA, SRB, SLO). It was a sort of a warm-up for SSC/First18 fleet, which afterwards moved to Portorož and raced in European Championship during next week and an opening regatta for classes Open and ORC, starting the autumn regatta season.

The entry number was a bit less than expected, but just enough to has satisfied the World Sailing conditions to make it a valid championship for the official European Champion title, which was unbeatably won by team Dejan Presen and Denes Szilagyi (JK Mipc) – they scored first places only and in the end not sailed the last two regattas, as they did not have to due to scoring system applied.
Dejan Presen: “We have sailed an excellently organized second European Championship in class Seascape/First 18. Our team has sailed perfectly, we were really competitive, retained great boat speed throughout the whole championship and finally won all the regattas we have sailed. We are leaving this championship with a perfect score, despite the presence of a few very good teams, who in the end motivated us even more”
Silver medal was won by Blaž Kmetec and Jure Jerkovič (ŠD Gibanca) and the bronze went into the hands of father-son team Jure and Urban Jerman (JK Pirat).
4 racing days (Wed-Sat) plan included technical windward-leeward races (max 11) with a possibility of 2 offshore races (sailed in the same day) and evening Social program with Opening Ceremony, 3×3 Basketball tournament (in the end the winners were Team SRB), Live concert with the wild KiNG FOO band and Closing Ceremony with Havana Party.
In the end 8 tech races were sailed and 2 offshore (from Portorož to Izola and back on Thursday).

Shore basis of the championship was for the very first time the Center of Portorož – new also for us – the organizers. It was a sort of a trial venue for the biggest event next year – the 44 Cup.  Yes, black beauties are returning to Portorož 🙂

This championship was an important event also from another aspect – it was the European launch of the HARKEN DERM cosmetics, created and dedicated to sailors, with a great respect for the environment.
The founder of HARKEN DERM, a distinguished dermatologist and university professor Dr. Edit Olasz Harken, MD has personally delivered a set of All Mineral Sunscreen & After Sun Lotion for every team.
She came together with her husband, a living legend of the sailing world, Mr. Peter Harken, the cofounder (with his brother Olaf) of the world best sailing gear HARKEN Inc., who handed over the HARKEN prizes to the winners of the 3×3 Basketball Tournament – to the Serbian team.
We will present HARKEN DERM more in detail in one of our next posts.

By the end of GoSAILING WEEK also the fleet of 9 Fireballs from CZE and SLO joined in and fought for the National Champion title, who was won by Mitja Nemec and Jerneja Škof (JK Fireball). It was their first ever title. The winner of the Open National Championship was a Czech crew Johanka Napravnikova Koranova, Jakub Napravnik Koran.

The GoSAILING WEEK 2019 has ended on Sunday, September 01 – not to mention, that we had moderate bora wind kicking in just the next day 😉

Mitja Margon, Event Coordinator from ŠD GoSAILING, who attended Val NAvtika Cup and European Championship as both – the competitor and organizer, commented the past 10 days: “We are closing a hard working week, also due to the extreme heat, which also influenced the wind and I believe we can be pretty lucky to have fulfilled the majority of the racing schedule. Of course we have wished for a bit better wind conditions, which would create better sailing conditions also for heavier crews, but as for the wind – we have what we get. The novelty was the new location and we welcomed a few new team members, but in the end everything went by smoothly. The best  teams have won and my congratulations go to all of them. What pleases us most is the feed-back of the competitors on the whole happening, especially from those, who traveled a long way. Happy sailors are the biggest reward to all of us – for those on the water, caring to assure the fairest racing conditions for all and those on shore, taking over the social program and back office“.

Dear Sailors, thank you all again for coming and sailing the second European Championship again in Portorož.
We wish to thank also the Class Seascape/First18 for trusting us with organization.

In the end our big Thank You goes to our members and all friends who took part in the organization team. Each and one of you have contributed to the event.

Photos are available in our GALLERY.